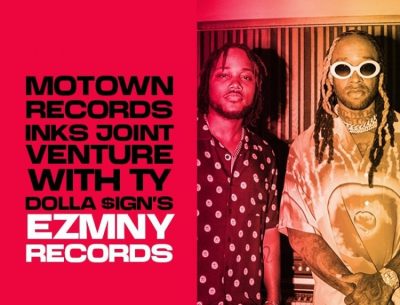 Along with revealing the label that he has formed in partnership with Motown, Ty has also announced the first signee, producer-singer-songwriter, Leon Thomas.

“Leon’s talent was just a higher level from every other singer or producer that I was hearing, and the fact that he was doing everything himself from playing bass to working Logic and Pro Tools [was amazing],” Ty tells Billboard. “From the first song I heard, I knew he was one of them ones.”

“As a prolific songwriter, producer, and all-around creative, Ty is a craftsman who continues to showcase new depths of his artistry. We’re looking forward to this partnership with EZMNY Records and presenting their first artist Leon Thomas,” said Motown CEO/chairwoman Ethiopia Habtemariam.

“Cementing this partnership with my longtime friend Ty is a dream come true. We’ve created so many huge moments together and are on the verge of even more with Leon and his incredible talent.”

Leon has previously written and produced for artists such as Post Malone, Ariana Grande, Drake, Chris Brown, and more. He is slated to drop new music as an artist himself this Spring.