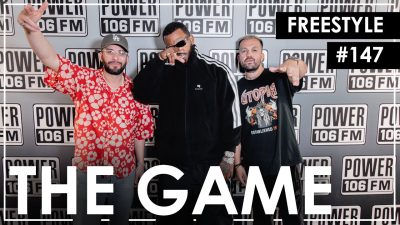 The Game LA Leakers Freestyle: American rapper The Game‘s Drillmatic: Heart Vs. Mind has been faced with several delays over the past few months, though the West Coast rap legend isn’t letting that dim his confidence.

Ahead of the rescheduled August the 12th release date, the 42-year-old headed over to Power 106 where he laid down bars for his L.A. Leakers freestyle over a previously unheard Hit-Boy beat for Justin Credible and DJ Sourmilk.

The Game name-dropped several of his contemporaries, from Kendrick Lamar and J. Cole to Kanye West and Dr. Dre.

“But I’m here masking up, with the masking tape / Fiends knocking on the door, we closed, don’t ask for Ye / You see the Aftermath chains then don’t ask for Dre / I’m a legend now, f*ck when I pass away.”

While details about Drillmatic remain mostly under wraps, we do know that the project boasts 30 titles, all produced by Hit-Boy, seven of which are sample releases from JAY-Z’s discography.