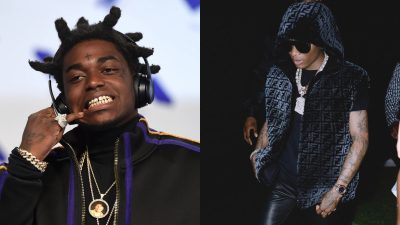 Kodak Black Wants To Collaborate With WizKid So We Can Top Charts Together: American rapper Kodak Black has asked Nigerian Afrobeat superstar WizKid to collaborate with him so they can dominate the charts together after he displaced him at the top of the charts with his song Super Gremlin.

The American rapper managed to topple WizKid who incredibly perched at the top for 27 consecutive weeks with his track ‘Essence’ featuring Nigerian singer Tems.

Billboard had taken to its official page and wrote;

A fan page of the Nigerian artiste reemphasized that indeed the song has spent 27 weeks at the top unchallenged.

Responding, Kodak Black then told the manager of the page not to worry as he intends to work with Wizkid for them to create a song that would top charts, which means they would both be in the top spot.