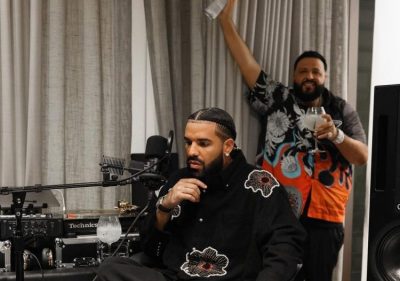 “I got some new music coming out with Drake real soon. This sh*t sound crazy too, the vocals are in!” he said while on FaceTime with Drake during his birthday celebrations in November, 2021.

Since then, Khaled has been hyping up his new album in the works with a Drake feature with the term “Drake Did!” all over Instagram.

It looks like they are now ready to let it go. Drake paid a visit to Khaled’s house on Monday night and while there, the duo teased that they are looking to release the anticipated song soon.

Watch the clip above.

Drizzy and Khaled also mention going through music video treatment ideas for the single which probably means it will most likely serve as the first single from the DJ & producer’s forthcoming LP. Khaled and Drake joined forces on twin singles ‘Popstar‘ and ‘Greece‘ in 2020 with the former becoming quite a big hit.